The Bun Bang Fai, or Rocket Festival is based on an ancient merit making ceremony, which is associated with the making of rain. It is held near the beginning of the wet season around the middle of May. Many Thais still hold a strong belief in the powers of the supernatural and the rockets sent skywards are meant to attract the attention of the supernatural powers so they can be blessed with abundant rain for the seasonal planting of their rice crops.

A little bit like the ancient Greeks, the Thais have a god of rain. Legend has it that Phaya Thaen, the most powerful god of the Isan region of Thailand, and the god of rain, was angry with the people and animals of earth and caused no rain to fall for many years. The Phaya Khankhak, a former incarnation of the Buddha in the toad form, mobilized animals to fight against Phaya Thaen and they won. As a result, Phya Thaen had to promise that if during the sixth lunar month (roughly corresponding to May) each year, bamboo rockets were launched on earth, he would not fail to make the rain fall.

So with that brief overview let us move on to the fun part.

Celebrations normally start with lots of music and dance. Thais, (especially in the northern and eastern parts that are closer to the Lao border) love their traditional music and dance. There music is unlike any western music and is normally played LOUD and not just loud, it is EAR PIERCINGLY LOUD. If you are deaf, then no problems, because you will feel it shake your bones. 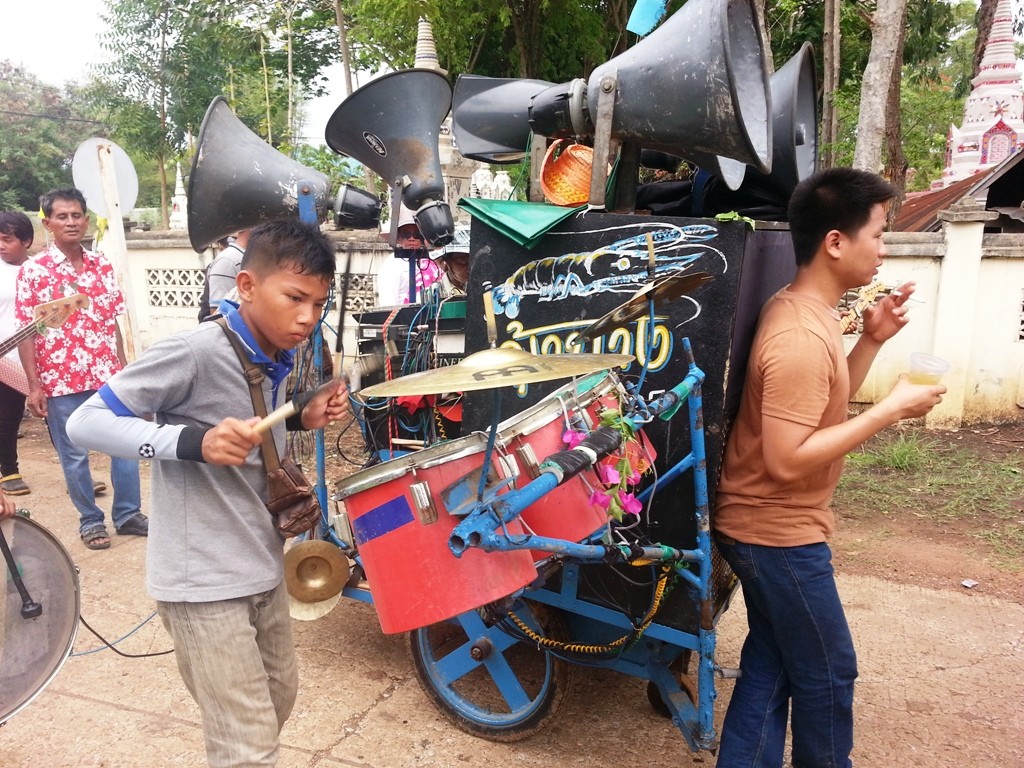 The traditional costumes are also LOUD and colourful. It is as if they are meant to jump out at you and grab you.

Then there is the dance. The fingers, hands and arms appear to become double jointed and take on the appearance of a snake like creature as they weave about snakelike to that enchanting but LOUD music. 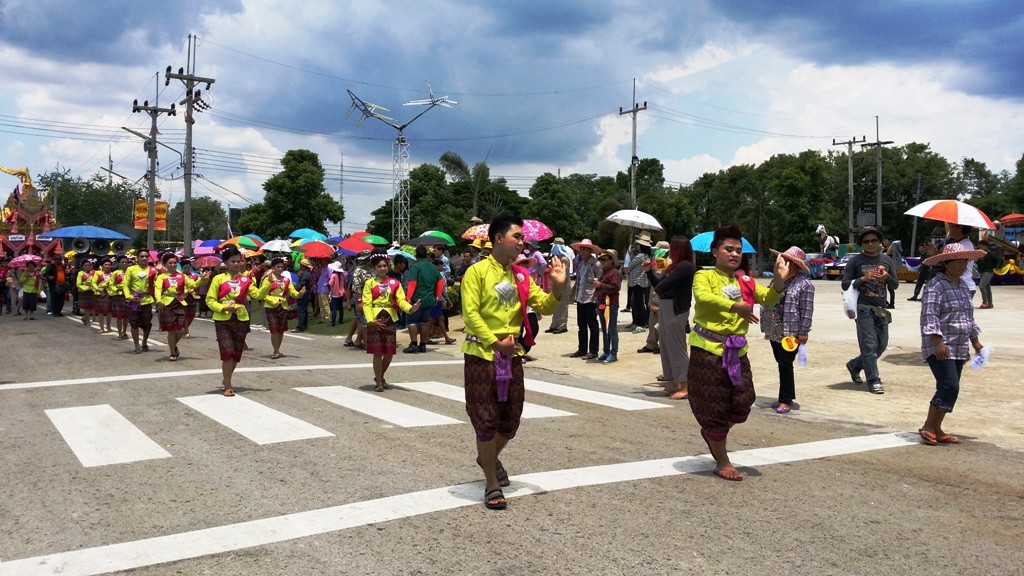 Then comes the procession of floats. Now if you have seen the floats in the Sydney Mardi Gras then think of a candle vs a floodlight hen you may be starting to get a wee glimpse of what these floats and costumes may be like. The “floats” come in all shapes sizes and varieties. They are not easy to describe, so I will let the images talk for themselves. 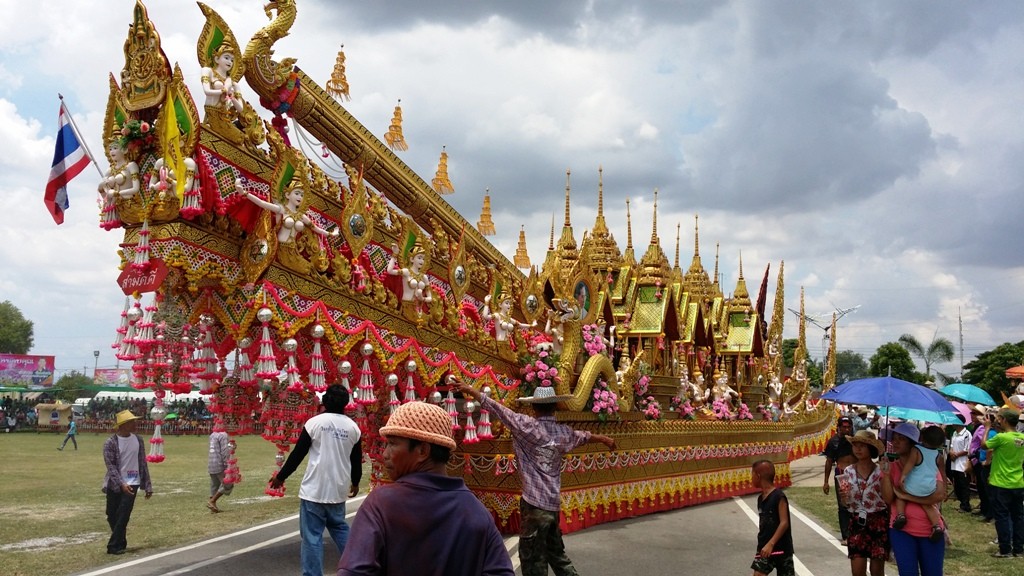 The First Traditional Float to arrive at the Si Thep 2014 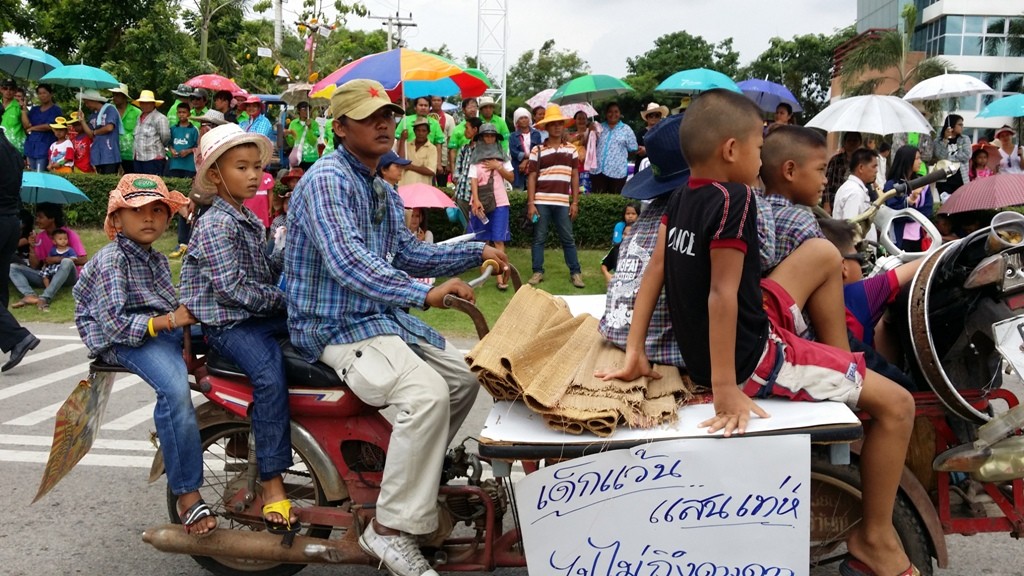 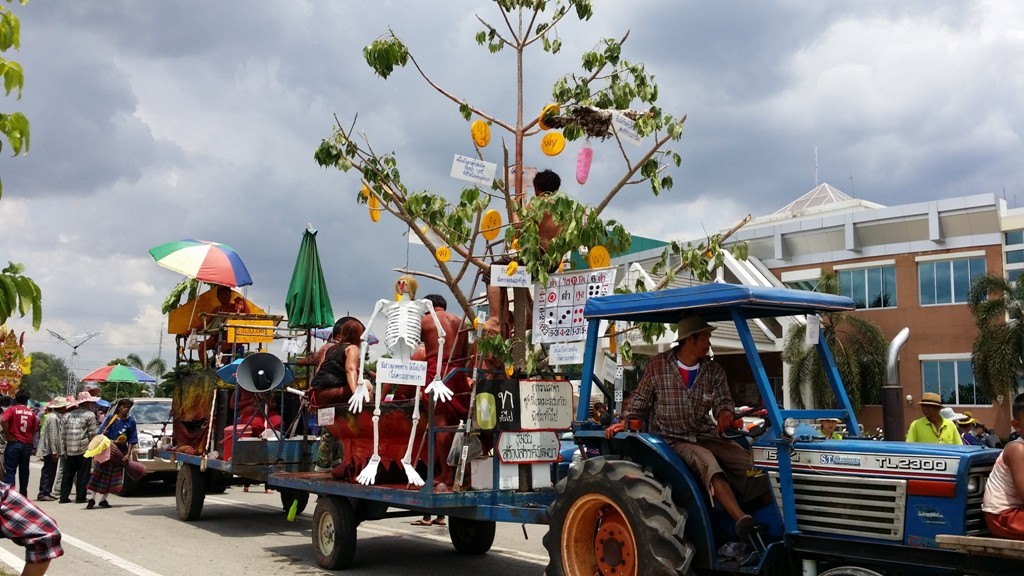 A very devilish float arrives. The Thais have a lot of vivid imagery depicting what happens in the after life if you do bad things to others.

The Bun Bang Fai for Rain and Fertility

Be warned that this festival is a little phallic in nature and I haven’t attempted to filter out any of these images. They a included to give an accurate description of the entire event. Throughout the day the use of phallic imagery and dirty humour is widespread. I am not 100% sure how the fertility got added to the festival as the legend is about rain. It is definitely not uncommon for parade ornaments and floats to sport phallic symbols and imagery. The following YouTube video was compiled from footage that Phat and I filmed at the Rocket Festival at Si Thep in 2014

The song and dance normally lasts for up to two days, and then on come the rockets.

For those that remember sky rockets in Australia, in the days when fireworks were still legal on the Queens birthday weekend, you would put these things in a bottle and fire them skyward, and if you got in the way you could lose an eye. Well these rockets that they use here are a little BIGGER. Yes like their music is loud and their costumes are colourful, their rockets are BIG In fact so big that they have raised concerns from the aviation authorities because some of them were entering the flight paths of commercial airlines. They were seriously worried that they could actually take down an aircraft.

Rockets being prepared for launch.

The first time I saw one of these things, I thought they were a joke and just for display. But then they fired the things.

One report states that on May 10, 1999, a 120 kg rocket exploded 50 meters above ground, just two seconds after launch, killing five persons and wounding 11. It is actually worth visiting that page. They have some pics that are even better than mine.

The biggest Bun Bang Fai Rocket Festival in Thailand is held in Yasathon but that is about 5 hours drive from here so I will be supporting the local one. Maybe for next year we can go to see if the rockets are better in Yasathon.

Note: Since writing this post we attended the Bun Bang Fai in May 2016. That blog article can be found here.

And I almost forgot. Like many celebrations around the world the favourite amber liquid (or white in the case of rice whisky), is consumed in volume. A little like the music and dress and rockets. Get the picture?