Although this may technically be a Thai Massage and it took place in a temple in Thailand, I would like to preface this blog post with the following statement: Although this event took place inside the grounds of a Buddhist Temple, it does not reflect Buddhist beliefs or give any indication of support to the methods used.

Those that participated, reported good results but the consensus is that these benefits were derived from a number of positive components of this variation of a Thai Massage, those being the use of heat, oil, wax, herbs and cold water. Each of these things are known to stimulate and aid in relaxation and healing of body and muscle tissue.

Having covered myself with the above statement, I will now attempt to describe what I saw, and add my own interpretation on some of the things that were explained to me.

The Thai culture is different to the western culture. Very different in many ways. To a westerner, some of the things that Thais believe are not logical. but the reverse also applies and the Thais find it hard to understand our western “logic” and culture. Despite these many differences, there is no right or wrong… just differences. The two cultures have been baking in different ovens for thousands of years and the cook also used different recipes in the original mix.

Things are often done on the spur of the moment here in Thailand, or at least us westerners learn about things only days hours or minutes before they happen. Ok sometimes even seconds. In this case I was informed, with short notice, that some Thai friends (I never know how many until the car door closes) wanted to go to the temple for a massage. I assumed it was at a temple close by. Wrong assumption. It was an hours drive away.

It certainly was not a big elaborate temple, but none-the-less it was a temple.

On arrival we were taken to an area adjacent to the temple that was an open-walled structure. This is common in Thailand as it shelters from the sun and rain but allows the breeze to flow through. It had a tiled concrete slab floor which was perfect for the type of massage I was about to witness.

I am not sure how to describe the masseuse. He was definitely an entertainer, and he did keep me entertained. He had a certain degree of natural showmanship. I could also see that he enjoyed attention as he appeared to put on a little bit of an extra show for the camera. He spoke some English. and although not fluent, it was enough to partly explain some of the proceedings to me. He also spoke fluent Thai and also an Isan dialect which is close to the Laos language. At times during the proceedings he broke into a prayer-like chant, and also spoke some other language. Nobody could tell me what this other language was, and I forgot to ask him directly. 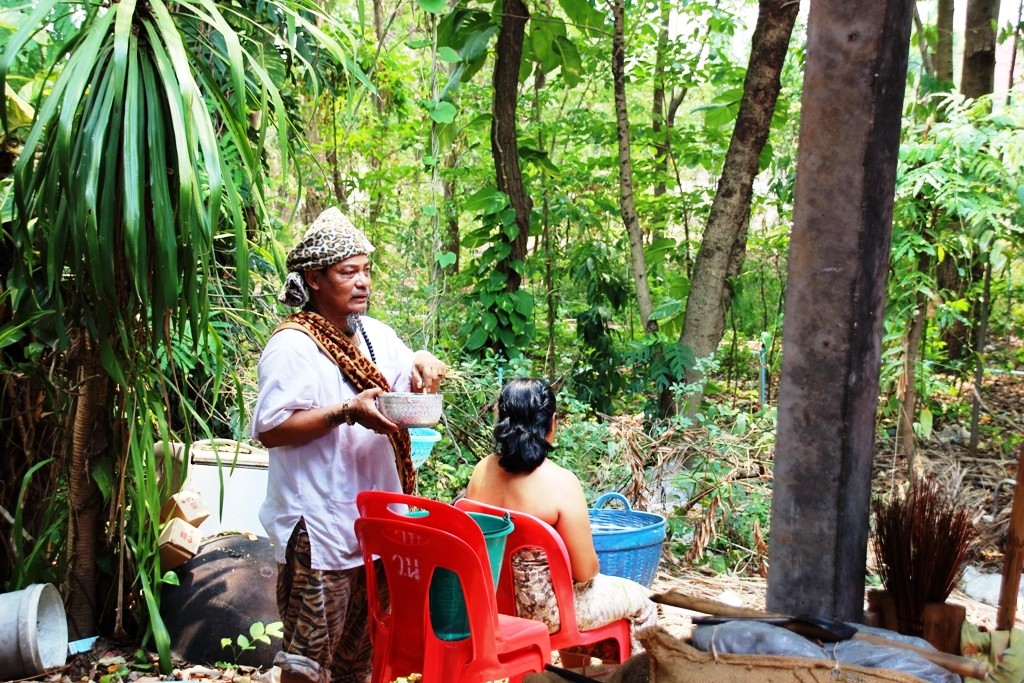 The masseuse dresses for the show

The first thing you notice about the masseuse is his attire. He was dressed for the part. It could be described as imitation tiger skin pants, with a white jacket or shirt and an imitation tiger skin over-shoulder accessory, plus another piece of tiger striped cloth as headgear.

You would not normally call a massage a ceremony, however that is the way it came across to me. There appeared to be parts that were non essential for a simple massage but were added for ceremonial or showmanship reasons.

Before the ceremony commenced, oil was poured into a shallow dish then a bag of herbs was added and left to soak. 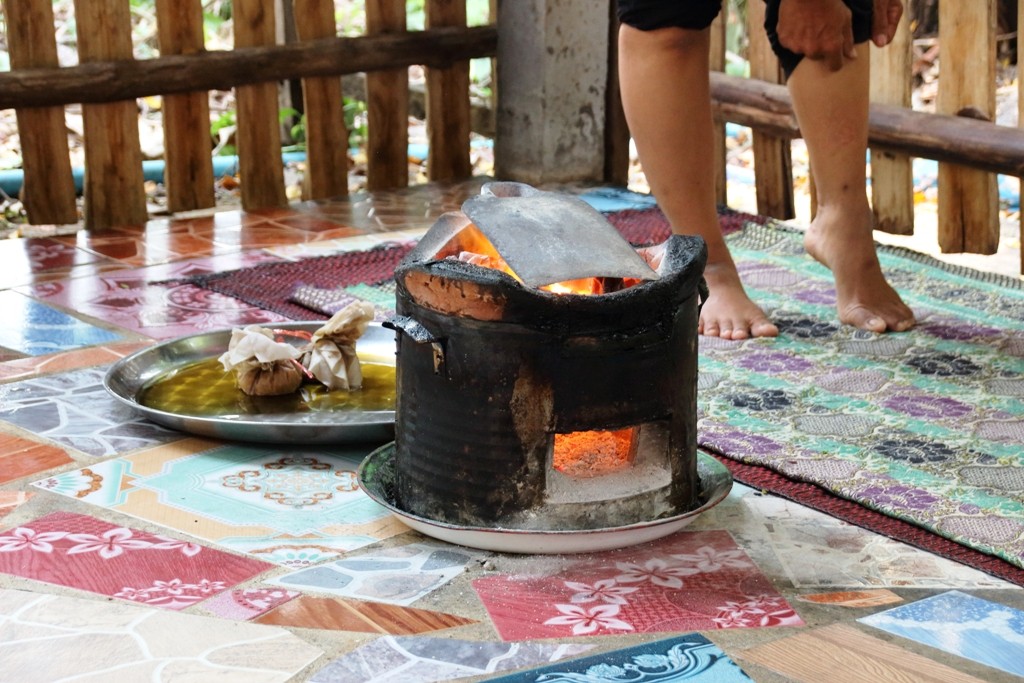 While the Thai style bucket BBQ was heating up, the masseuse drew a circle just above his ankle using what appeared to be an orange coloured ochre or clay. This, I was informed, was applied as a fire barrier to prevent the fire from travelling up the leg. 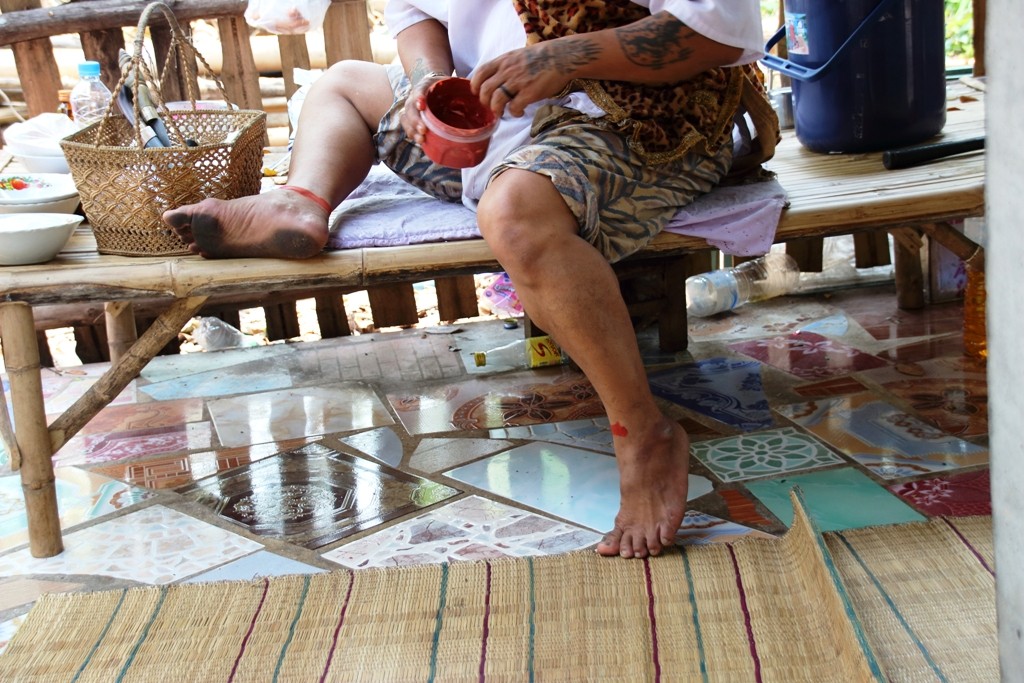 Fire protection is painted on above the ankles

Once everything is ready and the patient is relaxed and in position the masseuse offers a little prayer-like chant. I am not sure who to. At the end of this chant he ceremoniously blows on the hotplate 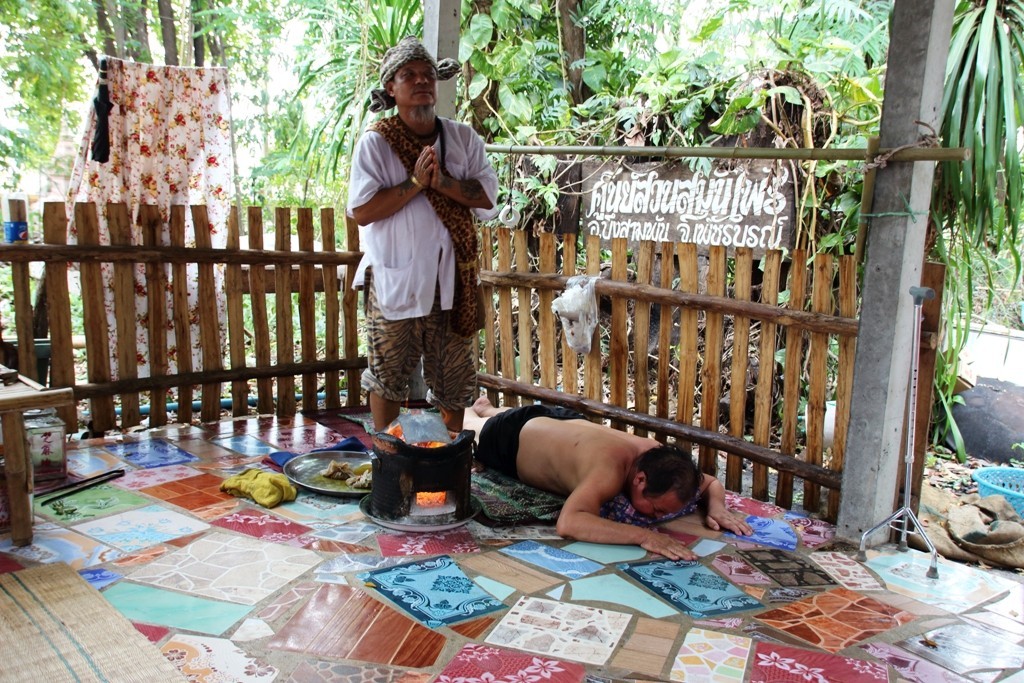 A prayer-like chant is offered before the massage commences

After the prayer-like chant was complete, the masseuse looked directly at the camera I had focused on him, dipped hit right foot into the herb infused oil and said “one, two, three, go”. At this point he slammed his oil soaked foot onto the hot upturned spade. What followed was a fiery burst of flame big enough to made some bystanders scurry for safer ground. 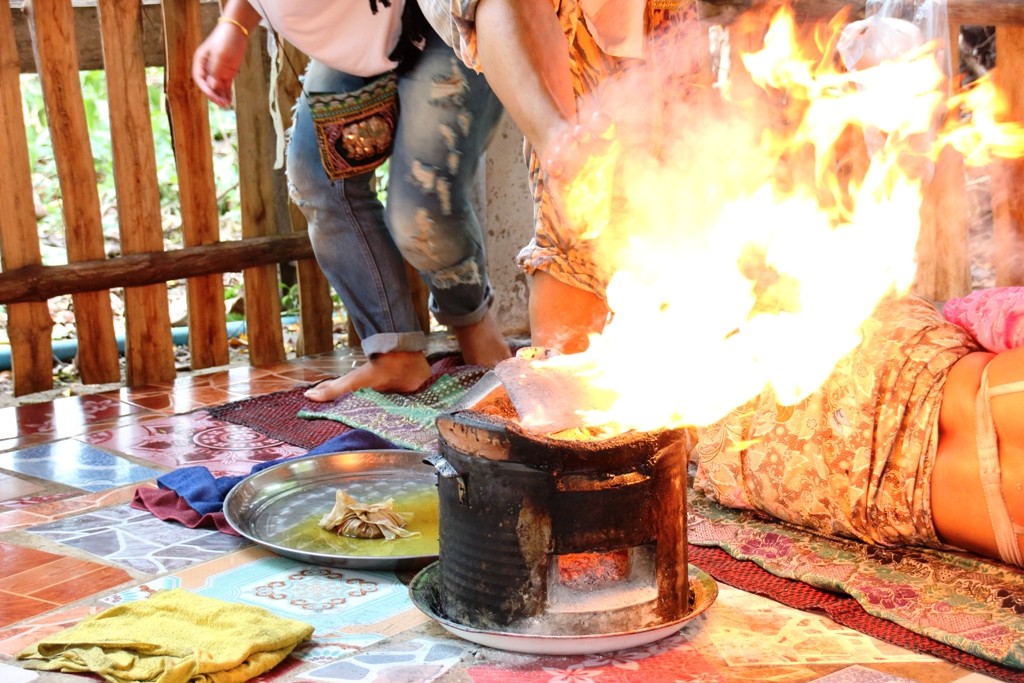 Once the massage was well under way, and continuing after the massage was complete, small black objects appeared on the skin. These were wiped off with paper tissue. This is where my western mind struggled. I was informed that this was the magic (my words) part of the massage. These little black specks were foreign bodies that existed deep under the skin and that this special massage process had invoked (my words again) them to the surface. When I attempted to get a closer look I was strictly instructed to not touch them under any circumstances, as they may enter me. I will make no further comment on this with the exception that not everyone in the room agreed with this statement. To avoid conflict I made no further attempts beyond the photographs below. 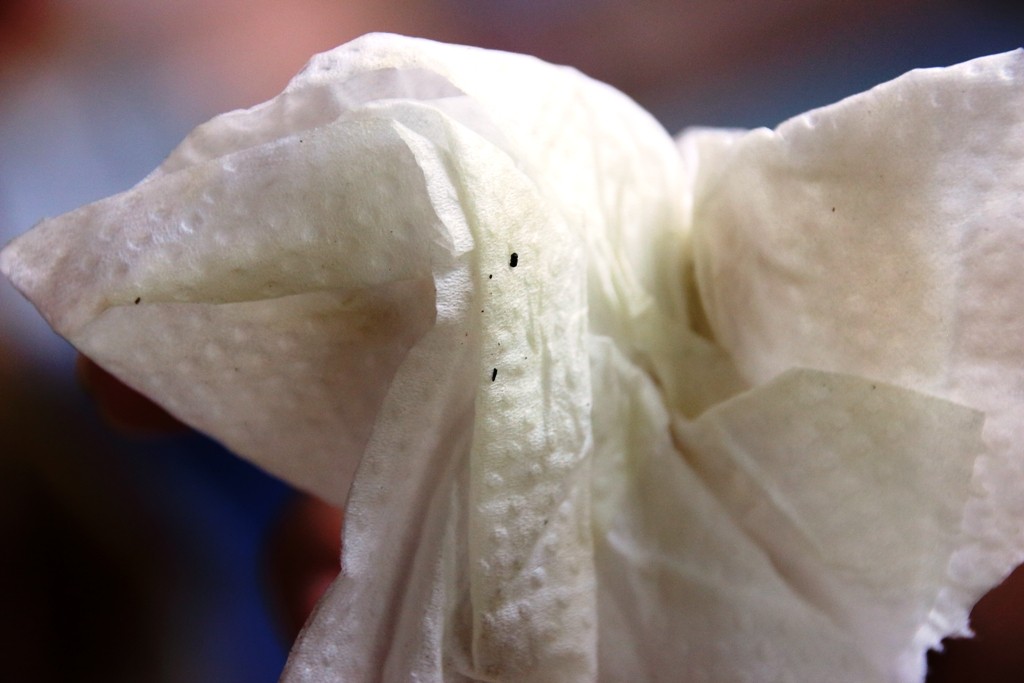 The black spots are carefully removed with paper towels

After the massage was completed, and the patient spent a few moments relaxing, they were then given a drink containing bitter herbs. This was then followed up with what some westerners may refer to as a bucket challenge where the patient was doused with cold water. This would no doubt help get the circulation going. The final treatment involved candles, The hot candle wax was slowly dripped onto the arms and feet of the patient as the candle burned to the end. During this process we were entertained with a little fire swallowing show to add to the entertainment value.

Although I was not an active participant on the receiving end of the fire-added Thai Massage, i did enjoy a more traditional massage from another masseuse and I gave the main masseuse a tip in return for an entertaining show.

The video below shows many of the highlights of this variation of a Thai Massage. If you believe that a picture paints a thousand word, then the below video probably paints a million.